Smart Meters and the Smart Grid

I’m sure that most of you have heard these terms, and I’m sure that all of the rhetoric has left you with some pretty distinct opinions on them as well, but what exactly is a smart electric meter and how can a smart grid benefit you?  Well, recently I installed a TED5000 whole home energy monitor which is pretty much the same thing as a smart meter and here’s what I’ve uncovered.

Essentially, my TED uses circuit taps (CTs) to monitor overall electric use.  The entire system is remarkably simple to install too.   With the main panel cover removed, I simply clamped the CTs around the two hot wires coming from the meter, plugged them into the MTU (which sits inside the panel itself), and connected the AC wires coming from the MTU to a 120 volt circuit.  I then plugged the separate gateway device (about the size of a plug-in “wall wart” power supply) into an outlet controlled by that circuit, and finally plugged its Ethernet connection into my home network.

Once set up, I browsed to the gateway’s built-in website and saw something quite wonderful: 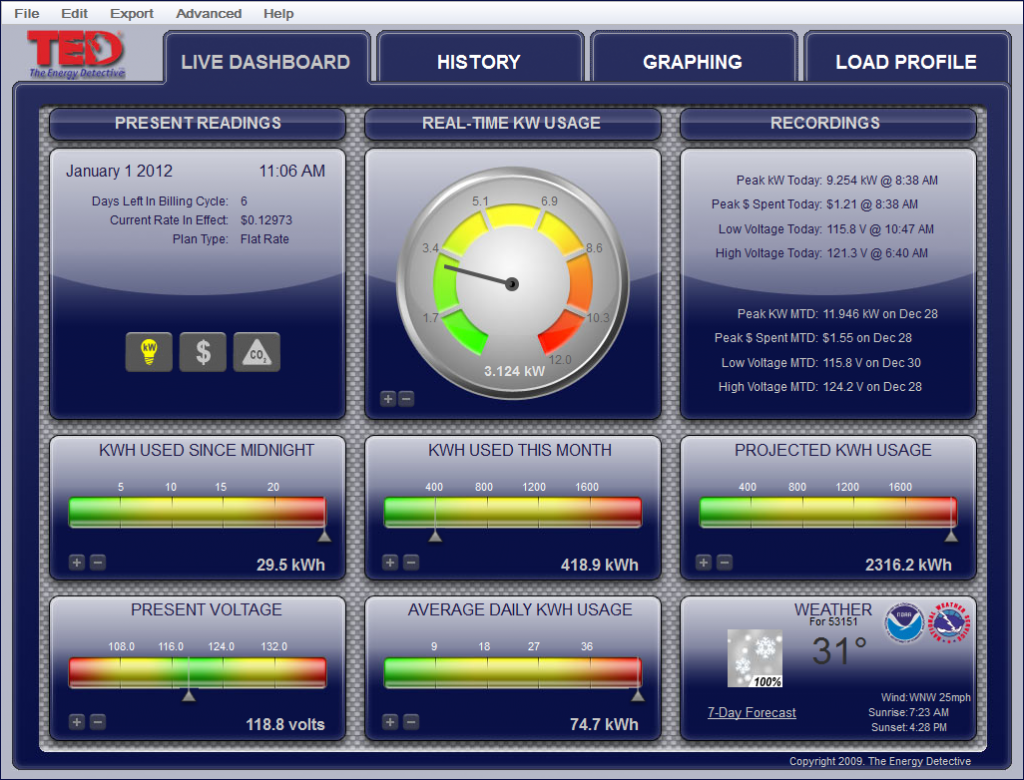 As I said earlier, Smart Power meters are the PoCo’s version of a TED5000.  Electric meters already are the best and most accurate circuit taps for whole-home use.  Monitoring electricity use is what they do by definition of course.  Smart electric meters simply add wireless capabilities to this which they then use to connect to the PoCo and in some cases the customer’s home network.

Now, my TED5000 has a few nifty features to help me control energy costs.  Once I entered the  electric rates off my energy bill, I could click the “$” button and see some pretty interesting stuff: 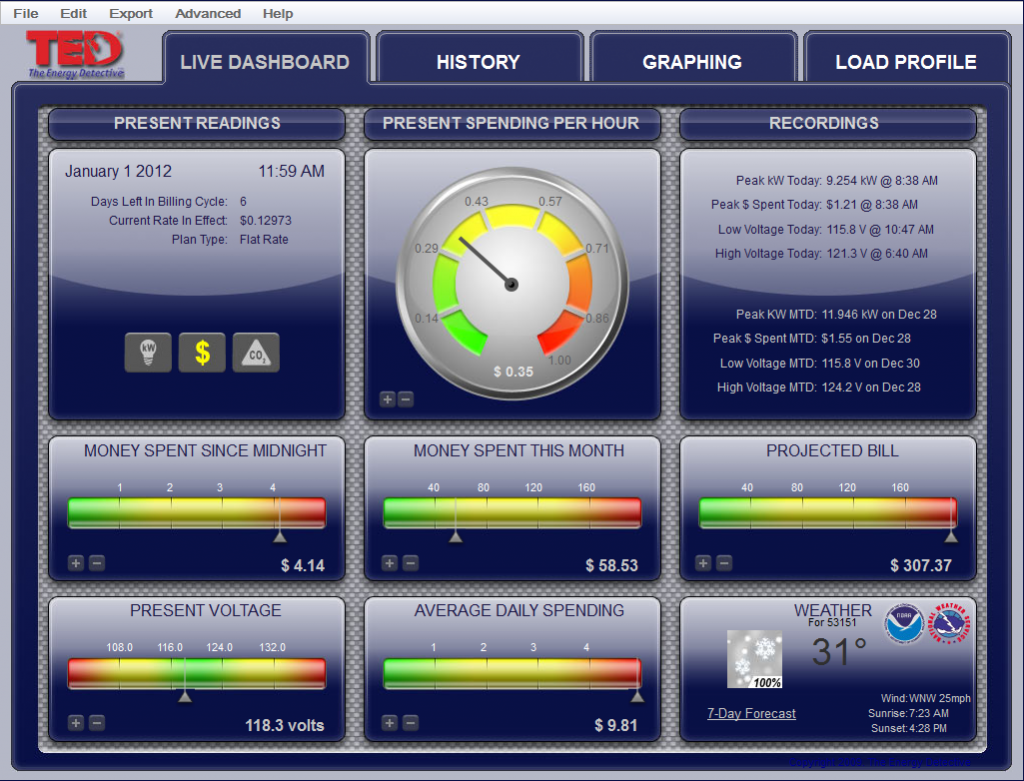 Using the included wireless handheld device which shows (among other things ) instantaneous power consumption, I could also go down to my main electrical panel and map how much energy each circuit was drawing by simply powering off that circuit and observing the change in overall consumption.  In fact, that’s exactly what I’ve been doing  over the last few weeks.  I’m now beginning to build up a pretty good picture of the exact manner in which my house uses electricity.

Now this is cool, and its a great way to start saving energy, but its also time consuming and a bit disruptive.  What if there was something better?  Well there is and the secret lies here:

TED can also capture detailed power usage history and that’s immediately what I set up mine to do.  After a few days, some really useful data began to appear in my graphs section: 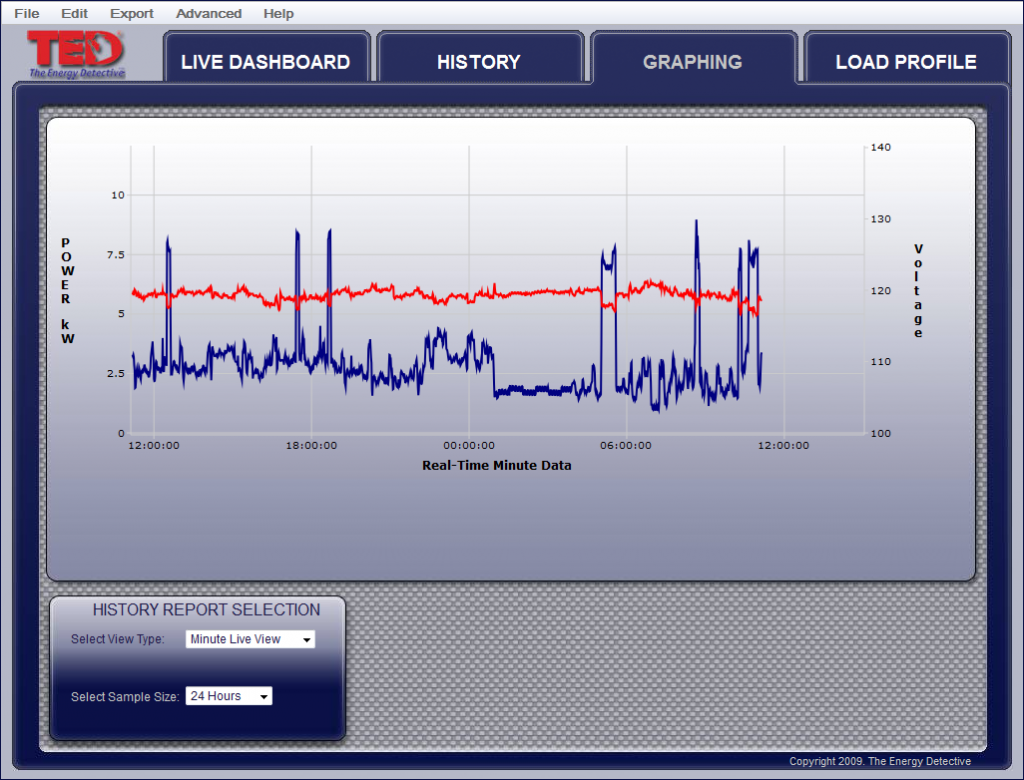 Imagine that the above graph is the recording from a symphony orchestra playing a well known piece. That water heater would be the crashing cymbals, easily heard above the rest of the orchestra during a climatic moment.  Now it would be difficult for my ears to make out other individual instruments, but for a computer, picking out and isolating a single flute in the flute section would be trivial.  In fact, the analogy holds true for my energy graph as well.  However, instead of individual instruments, my own electric “symphony” consists of the unique energy signatures made by every electrical device in my home.

This is the interesting part:  My TED5000, like a smart meter, has an Internet connection which it is using to send historical power data to a start-up company named myEner$ave.

myEner$ave is one of a number of similar companies looking to do the same thing: help me save energy by breaking down my electric bill to the individual appliance level.  The company is looking at my data for free right now as a part of their beta program because they are working on the algorithms that will pick out every one of my appliances from the overall energy pattern.  Here’s what my data looks like so far: 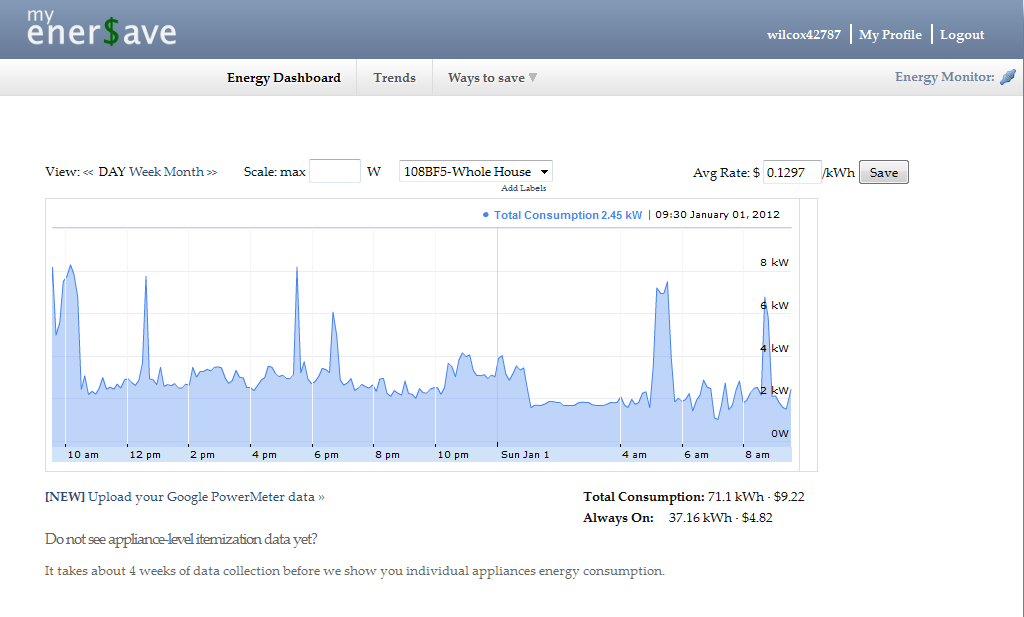 Within a month or so, they will have enough to begin plotting a great deal more detail. Here’s what that will look like: 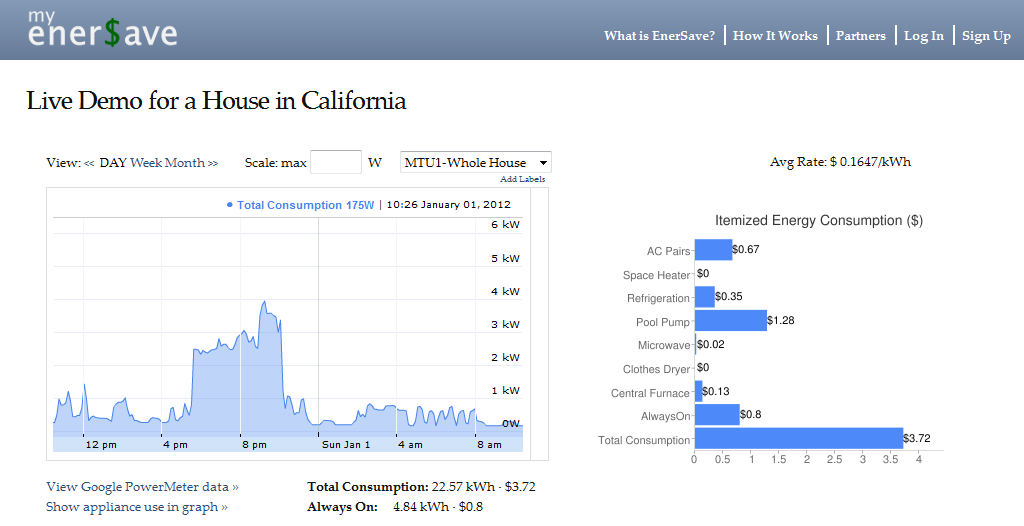 What’s in it for a company like this?  Well, the business model is pretty straightforward:  myEner$ave plans to implement a subscription based service that gives subscribers a unique view into their energy use.  Perhaps a PoCo would choose to transmit power data for its install base in return for the metrics myEner$ave could provide, then use those metrics to control power use and distribution on the grid more efficiently.  A “smart grid” so to speak.

myEner$ave can also suggest ways to save energy to the subscribing end user and can tie in a market for sponsors that make the equipment.  In my own case, it was easy to see how removing my electric water heater would save money.  I’m looking at tankless water heaters right now as a direct consequence of what my TED5000 has revealed.

So here we have good old capitalism at its very best.  A new market, focused on energy with so much business opportunity that the tier one venture capitalists are involved.  This is a prime example of the only viable path that gets us to the new energy era.  Simply put, people will only switch to new energy sources and management methods when they can make money at it.

Consider this the next time you hear the terms “Smart grid” and “Smart meter”.

This entry was posted in Energy, Gizmos, Our Fragile Planet, Politics. Bookmark the permalink.