In second term elections, a president must ultimately run on his administration’s accomplishments and against the inevitable promise of “Great Change” from his challenger.

…so, I thought I’d list a few of the more important ones.

(Just a couple of) the Obama Administration’s accomplishments:

1. The first bill President Obama signed was the Lilly Ledbetter Fair Pay Act, to help women fight back when they don’t get equal pay for equal work.

2. His Recovery Act supported millions of jobs and helped to stave off a second Great Depression.

3. He pushed for and won middle-class tax cuts that benefitted every American worker, and saved the typical family $3,600 in taxes over the last four years.

4. President Obama rescued the auto industry, and now GM and Chrysler are healthier than they’ve ever been. The American auto industry has added nearly a quarter of a million jobs since June 2009 — and they most likely wouldn’t exist right now without President Obama’s leadership.

6. His student loan reform ended billions in subsidies to banks serving as middlemen and reinvested those savings directly into students.

7. The President established the American Opportunity Tax Credit, worth up to $10,000 over four years of college.

8. His Race to the Top Initiative helped spur nearly every state to raise academic standards. 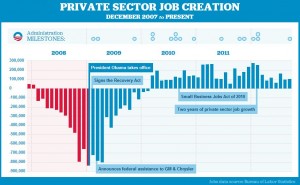 12. The unemployment rate is at the lowest level since President Obama took office.

13. Health care reform — passed after decades of failed attempts by every previous President — provides affordable health coverage to every American and will lower premiums by an average of $2,000 per family by 2019.

14. Obamacare expanded access to lifesaving preventive care such as cancer screenings and immunizations with no out-of-pocket costs for 54 million Americans.

16. Because of Obamacare, over 3 million more young adults have health insurance today than would if the new law hadn’t passed.

17. The parents of over 17 million children with pre-existing conditions no longer have to worry that their children will be denied coverage.

18. President Obama has ordered the overhaul of federal government regulations to make them smarter, practical, and more efficient. Just a fraction of these commonsense initiatives will help save businesses $10 billion in the next five years alone.

19. His historic investments in clean energy have helped more than double the amount of electricity we obtain from wind and solar sources and helped increase biofuel production to its highest level in history.

20. President Obama is doubling fuel efficiency standards, which will save drivers more than $8,000 at the gas pump, not to mention lessen the impact of automobiles on our environment.

22. He has taken historic action to protect our environment — signing one of the largest expansions of protected wilderness in a generation and putting in place standards to reduce toxic air pollution that will save thousands of lives.

23. President Obama fought for and won landmark Wall Street reform that reins in the abuses that led to the financial crisis and ends the era of taxpayer bailouts and “too big to fail.”

25. As part of President Obama’s commitment to transparency, the White House has posted its visitor records online for the first time ever.

26. President Obama’s all-of-the-above approach to energy has helped cut the United States’ dependence on foreign oil to its lowest level in 20 years.

28. He announced a plan to end the war in Afghanistan and transition security responsibility to the Afghan people.

29. President Obama sent the largest security assistance package to Israel in history and funded the Iron Dome system, which is protecting Israeli homes and schools from rocket attacks.

30. President Obama rallied the international community to implement the toughest sanctions on Iran in history.

31. Through the President’s historic increases in Veterans Affairs funding, he has expanded and improved healthcare and job training access for our returning veterans.

32. President Obama negotiated the New START Treaty with Russia to reduce the number of nuclear weapons in both countries. At the same time, he also secured commitments from dozens of other countries to lock down nuclear materials.

34. President Obama set a bold new plan for the future of NASA space exploration, using the skill and ability of the private sector for short trips to the International Space Station, while building a new vehicle for exploration of distant space, and doing everything in his power to support the economy on Florida’s Space Coast.

35. President Obama recognizes that tourism is one of America’s largest economic engines; he’s worked to encourage international visitors to come here, maintaining our security while keeping millions of Americans in good, paying jobs.

36. He has affirmed his personal support of marriage equality, directed the Justice Department to stop defending DOMA in federal courts, and took the practical and compassionate step of extending hospital visitation rights to same-sex partners.

37. He fought for and won the repeal of Don’t Ask, Don’t Tell, allowing gay and lesbian members of the military to serve openly for the first time in history.

38. When Congress failed to fix our broken immigration system, his administration did everything in its power to improve it, streamlining the legal immigration process and announcing a policy that lifts the shadow of deportation from hard working young immigrants brought to the U.S. as children.

39. Oh, and he gave the order to send troops in after Osama Bin Laden — and has decimated al-Qaeda’s senior leadership.

This entry was posted in Politics. Bookmark the permalink.

One Response to Accomplishments