Something Europeans should know

The deep freeze of 2010.  Proof that there is no global warming.  I mean, how can there be global warming when everything’s freezing across the entire European continent?

That’s the conventional wisdom driving many people to conclude that the “scientific evidence” being evangelized by many is some sort of fabrication designed to cast uncertainty and doubt at best, or a carefully contrived lie whose entire purpose is to enrich personal wealth at worst.  In either case, how can these supposed “scientists” continue to spout this drivel in the face of  such overwhelming evidence?

Perhaps we should consider this:  Europe is North.  Way North.  But thanks to the great Atlantic conveyor, enough warm water pours past to allow Palm trees to exist in Ireland.  This fact is unbelievable in itself when one considers the latitude of Belfast, a city in the middle of Ireland, is 54 degrees, 37 minutes North.  That’s less than 300 miles south of Juneau Alaska.  Heck, Minneapolis Minnesota, at 46 degrees, 55 minutes North latitude is itself about 450 miles south of Belfast.

Now to the scary part.  Here are some pictures of the great Atlantic conveyor showing heat disbursement.  First, one from October of 2008: 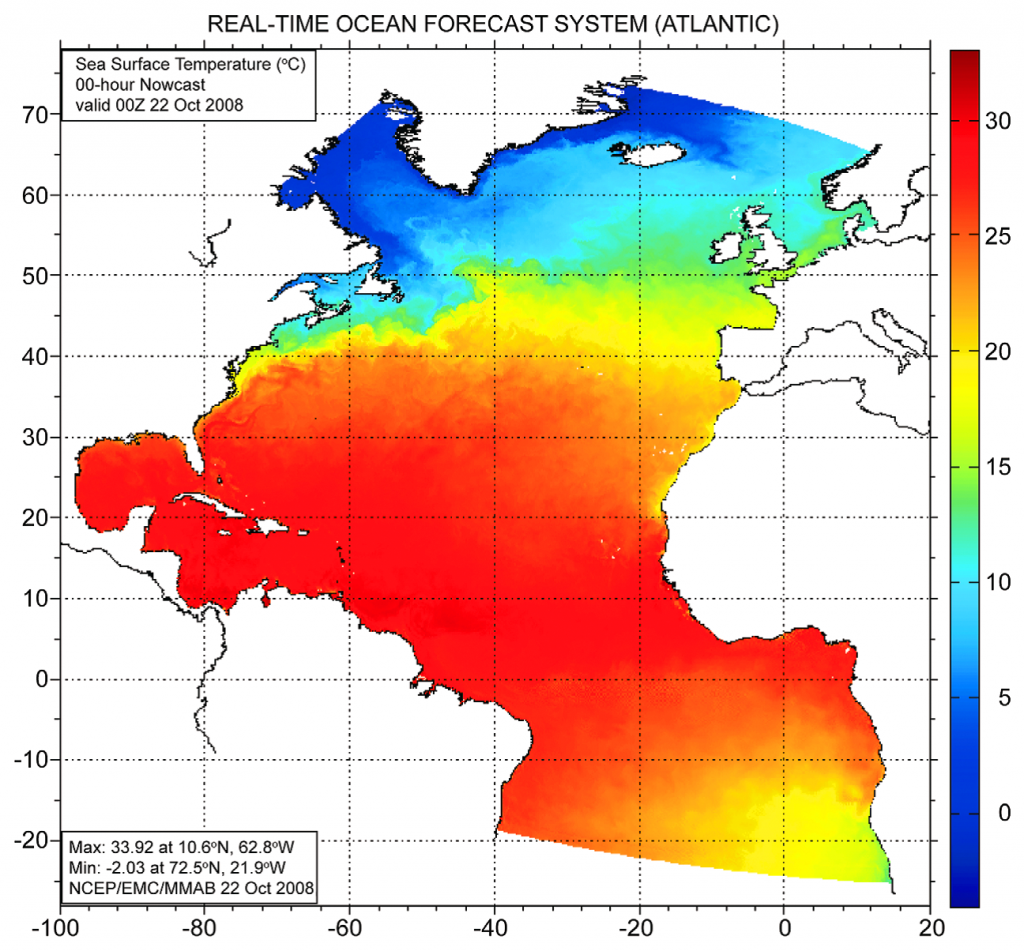 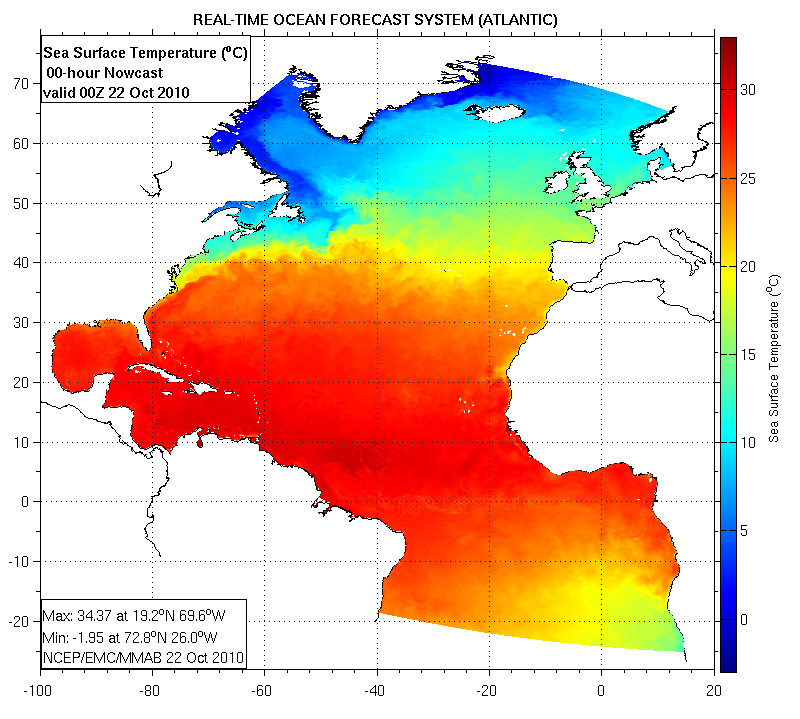 Ok, so what’s going on?  Notice the yellow band.  About the same location in both shots.  But why is the region around England so much more blue in 2010 than it is in 2008.  For the answer, look to the left at the large dark blue plume coming from Newfoundland that simply wasn’t there in 2008.  It’s pretty easy to see its effect on warm currents traveling Northward.  (As an aside, check out the increased equatorial heat zone too.  I wonder what effect that is having?)

Here’s the scary part:  Do you know what the blue plume is?  It is cold, fresh water coming from the accelerated ice melt that’s occurring up there.  Pretty much proof of what scientists are warning us about.   It’s effect on the conveyor is quite easy to see.  Without the Atlantic conveyor, Europe reverts to the kind of climate it should have.

Feel free to check out the current data yourself from the NOAA site.  Here’s the link: ROTFS (Atlantic).  Be sure to switch to salinity view to see what I’m talking about.

What’s the lesson here?  Simply, it is this: “global warming” is about increased energy in the system.  It doesn’t mean that every place on Earth will get hotter; rather it means that everything on Earth will change.  Storm systems will intensify, climatic regions will shift and with it, people will suddenly find that the infrastructure they’ve built based on their local climate will have suddenly become very, very inadequate.  Heck, I remember that the house I lived at in Rochdale, Lancashire England when I was 10 had external plumbing because nothing ever froze there.  That plumbing was painted bright green too!

The next effect of climate change, if drastic enough, could lead to mass migration as people try to escape from conditions that have suddenly become hostile.  At very least, economic problems must multiply as people try to adjust to the change.  Consider my childhood home in England as a case in point:  The plumbing was external because the walls were solid.  No major insulation was needed because of the mild climate.  Heck, it didn’t even have central heating.  Now those pipes have frozen.  The bathrooms don’t work any more.  There’s no running water.  What can poor Graham Litchfield (the man who bought the house) do now?  How much will it cost him?  Now multiply that problem by the rest of the reigon.  External plumbing is common in England.

The major effects of global warming are beginning.  If you haven’t seen the Palm trees of Ireland yet, it’s quite possible that you never will.

This entry was posted in Our Fragile Planet. Bookmark the permalink.