Take a look at this: 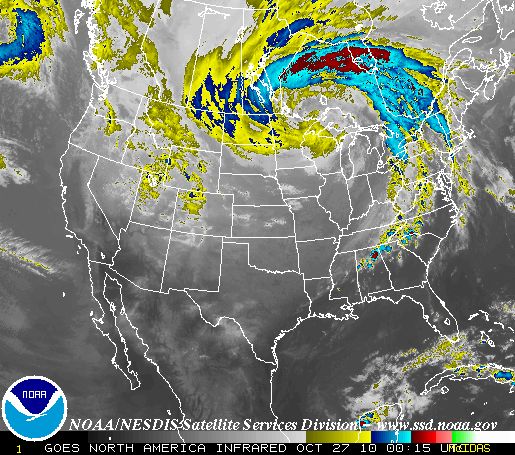 No, not a hurricane in the traditional sense, but an intense, record setting  low pressure system that quickly formed over the Midwest United States.   In Wisconsin, on Tuesday morning October 26th at 11:35 AM, the recorded atmospheric pressure at its center was 28.22″ or 956 mb.  That’s the lowest pressure ever recorded for a non-tropical storm in the US.  Interestingly, pressure readings such as this are also typical for category 3 hurricanes.

As a hurricane, this storm didn’t disappoint much either.  With wind gusts of 81 mph, the low spawned 21 Tornadoes, knocked out power at hundreds of thousands of homes, and at one time stretched a staggering 1,200 miles from north to south.  Off Point Betsie on lake Michigan, surge heights were recorded at 18-23 ft.

My wife was a meteorologist about a decade ago and she was amazed when she brought up the weather maps yesterday.  “I’ve never seen anything like this here before” she remarked in a low voice, almost to herself as she showed me what was on the screen.  What I saw was a huge, almost perfectly circular pattern with tight, closely spaced isobars just west of us.  “It’s occluded too” she added.

Over the winter of 2009/2o10 we also noted increased energy in the overall weather.  Everything looked bigger, more intense, and carried more moisture.  This came as no surprise to us however.  In fact it was predicted by climate models for our region; a direct result of global warming which is adding energy to our entire planet’s weather patterns.  Of course, a climate model and its associated political rhetoric is one thing, but roofs getting torn off buildings by something never before recorded is something all together different.

As I write this, the low is intensifying over Canada as it heads North East with a pressure reading that is now 955 mb.  That’s approaching the reading for a Category 4 Hurricane…

How’s the weather been where you live?

This entry was posted in Our Fragile Planet. Bookmark the permalink.