My original design called for surge protection and I was getting sick and tired of powering down the array every time the weather looked threatening.  So I decided to remedy the situation before leaving on a two week vacation.

SPDs or Surge Protection Devices work by shunting large transient currents to ground.  Transient currents on normally energized wires occur when lightning strikes near power poles.  This increases the electrical potential on high voltage wires carrying current to the step-down transformer or on low voltage wires downstream of the transformer.  Transient currents on neutral wires occur when lightning strikes within a few hundred feet of the physical array itself.  This creates an electrical potential difference between ground (which has its reference at a spike near the the service entrance) and neutral which is bonded at the main panel but has its primary reference at the power plant (because it is derived by the step down transformer).

The closer SPDs are to the protected area the better so we specified a Soladeck roof mounted junction box with built-in flashing for our through-the-roof connections.  Here’s a shot of it.

This is a DIN rail equipped, AC only interconnect box that also ties grounds on an internal bus for the array’s external ground connection at the supply meter.

Those features made it just about perfect for my SPD connections since they would run to the ground tie itself and also mount on the internal DIN rail.

So, what to protect on my 240 volt split single phase array?  Obviously the two hots need to be included since lightning strikes somewhere in our local power distribution network are quite possible.  In fact, I’ve had this happen three times in the 10 years I’ve lived at this home.

But what about neutral side protection?  Well, first let me explain the remedy.  To provide neutral side protection would require a GEC or Grounded Electrode Conductor running between the Soladeck junction box and a new set of ground stakes driven into the ground very close to the array.  GECs need to be continuous with no removable splices, so the actual process to run the thing would be complicated in and of itself.  Now this connection would have the additional benefit of protecting the array from direct lightning strikes but really, in our region, the probability of that is pretty low.  Finally, Neutral protection SPDs themselves are really rare (expensive).  So I decided to protect the hots only using two Citel DVS52VG-120 SPDs. 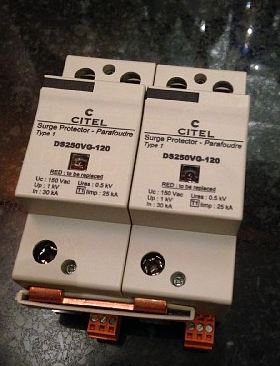 From a physical design perspective, these SPDs are pretty cool.  The upper two connections are actually tied together internally which pretty much means that the installer can simply cut a hot wire then connect the two ends directly to the SPD itself.  This generally eliminates the need for external splices.

Additionally, Citel devices can be ordered in different paired configurations.  In the split phase pairing shown at left, two SPDs come with a pre-installed external bus on the bottom connectors.  This means that only one wire needs to be run to the grounding bus bar.

As required by the NEC, each DS52VG also has an internal fuse to protect against a short to ground failure.  If it blows then indicator lights on the top glow red.  Of course, its not convenient to go on top of the roof after every storm to check this, so the DS250-VG also has an SPDT switch that can be connected to external indicators using low voltage wiring.  You can see these in the picture.

Here’s a diagram for hot side SPD protection on the AC portion of a PV system (three phase shown): 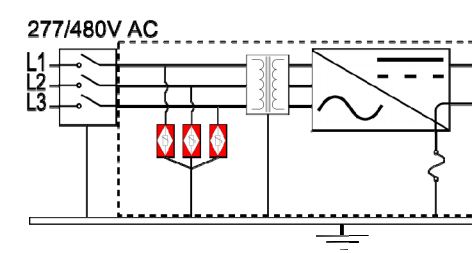 And, here’s the installed solution itself: 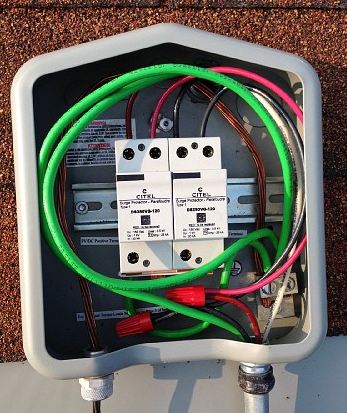 In my case, I still had to run a splice on each hot because I forgot to tell my installer to loop the wires inside the Soladeck junction box.

Still to do is running 5 conductor low voltage wiring for the external indicators then plugging it all into my home automation system so I can throw a warning if I lose an SPD fuse.  I’m going to wait for the attic to cool down in autumn before I take on that project however…

Ready to do it yourself?  Here’s the DS250-VG Datasheet and here’s the Enphase take on lighting and surge protection.  Finally, here is a very good white paper called Protecting Electrical PV Systems from the Effects of Lightning by Solectria Renewables.

Have fun with your own SPD design!